New Orleans, apres le deluge, but it was my first visit ever at the start of December: two days and three nights of enchantment and wonder in this living, breathing palimpsest of its many pasts. Slowly, I inhaled the atmosphere, the street names, Desire Iberville, Elysian Fields: so redolent to a newcomer, a sudden lover such as I. Two days and three nights of wandering, with music, music everywhere. The ice-cold oysters on the half shell and vodka martinis left me shaken. I am stirred. Steel and iron abound in this ruined City once so deeply entrenched in commerce written large. One thinks of Louisiana, past and present: refineries, shipping, docks and gantries. The ghostly remains of recently busy foundries and sheet metal shops litter the landscape from the southern shore of Lake Pontchartrain to the banks of the Mississippi at Algiers. Dreams of rebuilding fill the air, but the loss of half its population and the devastation of its economy have all but stopped large scale construction. The flood waters overwhelmed so much: though wrecked cars and toppled trees are rare sites today, even in the poorest wards, the streets are buckled. Ruination of Carthaginian proportions happened here, but among the few things left untouched when the waters receded are the manhole covers and sewer grates.

Melpomene, Terpsichore, Urania, Euterpe, Thalia, Clio, Erato, Polymnia, even Calliope (though now hiding under a tangle of highway overpasses) flower in the gaggle of street names just outside the Garden District. “Beautiful of speech,” perhaps this last muse of epic poetry waits in the offing, to tell much more fully of New Orleans’ rebirth. The muses of tragedy, history, many poesies – even song and dance yet abound in the damage all about. Some special god, though, provided protection to the sturdy ironwork that lies at gutter level and in the street beds. Moon and stars depicted on this manhole cover Moon and stars, diamond patterns: the varieties bespeak an art form now largely lost, but local examples abound, saved from the flood, emblematic of those who have returned to find a way to live here once again. The challenge of rebuilding lives scattered in the hurricane winds, of finding new roles in a much altered landscape, made me stop and catch my breath. Sadness crept over me, though, as I encountered underfoot, one after another, these antique entries into damp basements and the netherworld beneath the streets. My heart feels unrequited, a lover of the vanished erstwhile variety (though it’s cornucopic, still) a ferrous richness of a greater past. 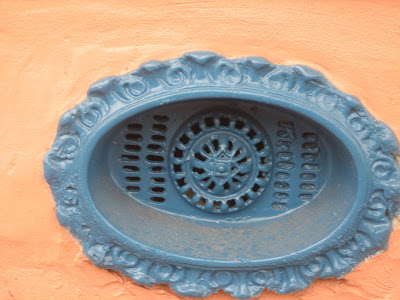 Along Esplanade near Frenchman South side of Rampart Street Breakfast at the Rampart Café, Saturday morning so quiet where once the traffic streamed by on its way east to Gentilly and beyond. This namesake street, once legendary, now lies distraught. Even the prime section across from Basin Street and Louis Armstrong Park is silent, much less the deserted environs to the west where the New Orleans Athletic Club’s gold-leafed oak doors warn that it is a Private Club, Members Only.
Who’s left to object, though? Rampart Street lies stripped of its workaday functions, now a naked dividing line between the apparent renaissance of the French Quarter and the denouement to the north.
The few pedestrians each greet me face to face, each essaying “Good mawnin” with cotton-soft drawls, their eyes downcast, as if they’re grateful I’ve bothered to visit, to acknowledge their existence by walking by.
Walk Poland Street in northern Bywater, course down Esplanade,
the asphalt warped but the live oaks flourishing in the sub-tropical air. Here a recently proud house careening at 30 degrees off its foundation; next door the ubiquitous FEMA trailer and Tyvek sheeting. Up in Lakewview and out at Lake Vista, appearances can be deceiving – but the 17th Street Canal break poured through just as close by, inundating blocks of spacious brick ranches, twenty years old or even less. Most homes sit vacant, the water lines barely visible, but recent plywood doesn’t lie. Banks, shopping strips, gas stations lie desolate everywhere, not the re-purposed varieties with off-brand names so common to inner-city neighborhoods. No, here in bourgeois Spanish Fort, off of upper Carrollton Avenue in Mid-City, stand Chase and BP, Starbucks, Staples: closed and stripped, the properties worthless ’cause no one’s home.

R. drove me around in his beat-up Nissan. New Orleans bred and born, he returned as soon as possible after the flood, his home destroyed, his business wrecked. There, he pointed out,was his friend’s warehouse up near the Industrial Canal. Though open and re-roofed, the streets hard by look just like Baghdad, gaping wounds staring at us from all about. In the midst of sorrow and unutterable loss, R. has survived, rebuilt his IT business, recreated himself and heeded the call.

Hope springs out of the fertile Delta loam. The Big Easy made life slow and free for generations of post-War searchers. (That’s post-Appomattox, not after Pearl Harbor). Post-Katrinans who returned when the City reopened have been forced to reinvent themselves from the letter A. Cobbling together a modus vivendi with cash and barter, those who work outside the CBD’s much-vacant office towers make do and breathe. Daily existence is improv theater. Auditions are held nightly down on Frenchmen Street, along Fulton and Thalia, muse to it all. Life, like the fire-molded manhole covers, has become an open casting call.

Not in their lifetimes, regardless of age, will the City return to what it was. Dealt a body blow by the loss of the petroleum industry headquarters in the late 1980s, its shipping, petrochemical and fishing industries in a long decline: then New Orleans took Katrina’s hit. The storm came and went and all was quiet. Google Maps of the area went suddenly dark. The sounds of children playing, the honk of car horns will never return to these battered streets, not in my remaining years, not in those of lives in being

Down by the waterfront you could think all was normal, if Harrah’s depicts us at our best. Through the lobby of the convention center Hilton, thousands of conventioneers pour in, ready for fun. The Association of Southern Schools (chartered 1895) is holding their annual convention this weekend. I crash the party among those dressed for success. Along French Market money jingles. Gaggles of no-neck monsters jostle and swear, their shaved heads and ripped torsos bursting with the hubris of living elsewhere and slumming here. It’s 11:00 a.m. and the LSU game starts soon. How can you start drinking on a Saturday morning? Guess I’m a pansy in this game of sports.

Three blocks north, though, traipse down Royal Street. Hog the sidewalk, it’s yours, all your own. Antique stores and fine galleries all beckon brightly. Nary a customer, nary a sound. Only the click of the banker’s meter: interest on inventory loans totting up, desperation shining in the salesgirls’ eyes. “The owner is here and would be happy to speak with you. We’re having a pre-Christmas special.” What’ll be thrown in gratis to seal to the deal? Think of the stalls in the shuk in Jerusalem’s Old City. You’re a hostage the moment you stop these days.

East of the edge of the fabled French Quarter: Faubourg/Marigny’s Frenchmen Street is place to go. The ambience is knee-deep: in and out of the clubs and bars stroll a mish-mosh of locals and itinerant junkies of music and more. Kahve coffee bar on Royal St in the Marigny

Deshabille is haute mode here, studiously unstudied, save for the fedoras that the young men sport. Felt or straw, you’re not a good hipster, unless you rake yours: proper, so. At Snug Harbor Elvin Marsalis ticles ivories two nights a week;

down the block at Café Negril, Margie Perez weaves her delicate, plaintive thrall: “Whooooo’s your Daddy…” and “I’m goin’ down…” pouring like warm caramel from her warbler’s throat. Her lithe young body is clothed so perfectly in mode non-descript, She moves and sways, merging herself, her songs, those listening: as one. Café Negril is of its own volition, a case of first of impression for those who enter. All are welcome, no cover, no minimum, buy a drink or not, bring yours in from your previous engagement. Many do: plastic takeout cocktail cups are de rigeur in the watering holes. Just enter this place and be what you want. But one silent rule: live and let live. In both nights of my recent engagement, an old man entered and paid his respects. Drunk as a lord, 70 years if a day, one never knows what modest celebrity one’s looking at through jaundiced tourist eyes. By the usual definitions the customer, an African American man with gray hair and disheveled clothing, reeking of liquor and unbathed for days: one would assume him to be an impoverished fellow, drinking away to his end of days. The man’s gnarled, dark knuckles were bedecked with thick silver rings, the glints complementing the flash of his broken-toothed smile. The music would move him and up he’d get from his barstool, pouring himself onto the dance floor in front of the tattered couches like those found in indie coffee bars. There he’d dance and stop just short of hassling any young women he spied nearby. (After all, Terpsichore Street runs not far away). The second night the fellow traipsed in clothed in full battle dress: in one hand a clutch of golfing-irons, bound with a thick rubber strap; in the other a new broom ready for striking hot licks. Café Negril welcomes jammers. Cat gut, steel string, broom straw, all. Headed out of town on Southern Crescent Bands that play here hang in the ‘hood, even if their gig is all played out. Down the long bar, the guyz from Friday’s band tossed back shots of Jack and glowed. Their van out front had been parked there for days. Crib and studio, this dirty panel truck sported flimsy curtains in the front seat windows. Daytime zzz’s need some kind of dark. Suddenly past me, the lead guitarist bolted, a barmaid in tow, then out the door. Passenger side-door, creaked open loudly: he, then she, clambered aboard. Out in the street, atop a barstool, a middle-aged guy made eye contact with me as I stood at the bar near the open doors. Our eyes rolled upwards in sync as the van bobbed on its axles; its shocks and struts did yeoman’s work.

Two days and three nights flew by like magic. I bade Café Negril a sorry So Long. Royal Street midnight, back to my lodging, pissing between parked cars with urgent abandon, knowing the pavement’s washed each day before dawn. Along came a kid playing a flatch patch bucket, not drumming it upright as so commonly seen. Using it as an echo-chamber megaphone, the boy held the bucket to his mouth at an angle, as he sang a gorgeous melody, tapping out a rhythm, soft.

All around me stood hundreds of houses, the richest collection of well-preserved, unpretentious mid- and late 19th century urban structures in all America. I felt like I’d died and gone to heaven. From the iron roundels, broken downspouts, Circe called me, she the mistress of potions and spells: “Here’s a place that’s safe from change; It’s time, to come and play your part.”

Three hours sleep and I’m up Monday, mourning. The Southern Crescent leaves at dawn. Though tucked in my sleeper, I refuse to really board. Compartment door securely fastened, my iPod holds me, spiked in place on the railroad ties. Liquor Boxx and Smokey Greenwell, Margie and Bif Naked: over and over I rolled on their tracks.

All along the steel underneath me: the clickety clack made a syncopated call. Come to New Orleans. Make your new self. Heed her open casting call…