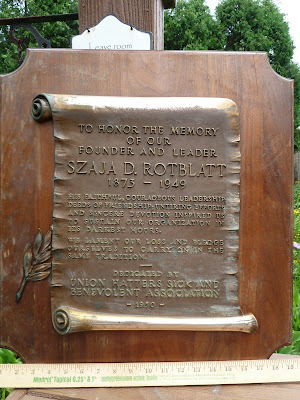 Driving east on a mid-town street in the mid-1980s, my acquaintance Andy W. spotted a bronze plaque in a pile of demolition debris.  Intrigued by the shiny item, he stopped and rescued this memorial plaque, dumped on the street at the start of renovation of a former union headquarters of the millinery trade. How in heaven’s name could the crew have been so heartless? The memory of a tzadik, a righteous man named Szaja Rotblatt, was thrown without ceremony into the trash. In this simple metallic scroll lies a story of proportions yet unmeasured. Perhaps they never truly will be. Through my search, its outline emerges. One day soon, this plaque will be mounted again in a place of honor. ‘Til then, the internet marks the spot for it to be. Szaja David Rotblatt was not famous or well-known, except to his comrades in the hatters’ trade. As I learned from his US citizenship naturalization papers, filed in New York County Supreme Court in 1914, Szaja was born in 1873 in Warsaw, and found work there as a blocker, the craftsman who places a cut and partially-formed hat on a mold and shapes it into a finished item.

It’s hard to conceive how important hats once were. JFK ended that for men mid-century, with an uncovered head at his snowy January inauguration, 1961. Jackie actually extended the life of ladies’ headwear, her signature pillbox numbers, re-defining classic style for the shrinking number of women who went about hat-adorned. Four decades before, Mary Pickford’s classic short “The Hat,” epitomized the role that Szaja’s craft played in American society. Take a gander at this tasty depiction. A woman’s hat was worth sacrifices so she could be beautiful and feel wanted; take another gander at this 1912 Mary Pickford silent short, The New York Hat.

Life in Poland was no picnic for a Jew, and poor economic conditions as well as rampant anti-Semitism sent Szaja, his wife Helen, and their three children to Paris where they booked passage in 1908 aboard the steamship La Provence that sailed from Le Havre on December 12, 1908. “Russia” is listed as the family’s native country as was the custom in the day (Poland being then still dominated by the Czar). Isaac, age 8, Herman, age 4, and Eleanora, age 2, (whose name was shortened to Eleanor in the USA), accompanied their mother, whose Yiddish name was Chaye, and their father, listed as David (Schaye) Rothblatt. Left behind in Paris was the family’s friend, Mendel Relmann, of 14 Rue Eugene Sue in the center of Montmartre in the 18th Arrondissement, hard by the Metro Marcadet Poisonniers, downhill and north of Sacre Coeur. Relmann’s 26-year old son Isidore, a tailor, was also aboard. Apparently the Rotblatt family had resided in France for some time before their departure for the Golden Land, at least long enough to form a friendship with the Relmann family. By 1910, the Rotblatt family had landed in East Harlem, a mecca for Eastern European Jews. Slightly less crowded than the Lower East Side, and with a housing stock, albeit also dilapidated, in general many decades younger than that downtown, the Rotblatts rented in the neighborhood at 117 East 115th Street, where they are listed on the 1910 census. The family spoke Yiddish at home as did most of their Jewish neighbors. Szaja found work in the millinery shops downtown, where the shop-floor language as well as the fiery rhetoric at union meetings was the same. By 1917, the United Cap and Hatmakers Union of North America was in the forefront of radical socialist labor struggles in the US. Its monthly organ, The Headgear Worker, was published in Yiddish and English.

The December 1917 issue wishes its readers a happy New Year, and then launches into a frequently heard rallying cry for the increasingly leftist group which had just seen a year filled with the Bolshevik uprising in Russia and major outbreaks of anti-capitalist furor all over the Western world.

In boldface caps, Szaja and his comrades were exhorted:

THE PASSED YEAR WAS RICH IN EVENTS MAKING IT AN EPOCH IN THE HISTORY OF MANKIND. STRUGGLING IN SEAS OF BLOOD AND UNDER THE THUNDER OF CANNONS, THE HUMAN FAMILY IS PROGRESSING TO ITS FULL EMANCIPATION FROM ALL FORMS OF POLITICAL AND ECONOMIC SLAVERY. TOGETHER WITH THE THRONE OF THE CZAR WAS [sic] ALSO SHATTERED THE THRONES OF THE CAPITALIST AUTOCRATS, AND EVEN IN GERMANY THERE ARE SIGNS OF THE AWAKENING OF THE PEOPLE AND ITS READINESS TO CAST OFF THE YOKE OF THE HOHENZOLLERNS AND ALL THEIR CAPITALIST COTERIE. LET THE COMING NEW YEAR ACCOMPLISH YOUR AND OUR FULL HEARTS DESIRE… Thus ended a year that had devastated Szaja’s homeland and the rest of Europe. The end of the next would throw both Europe and the United States into a financial tail-spin, as the bubble of war work and munitions production ended with Armistice Day 1918. Military contracts for headgear disappeared from the New York shops and with that came reduced wages and hours for hatters across the board. During the mid-decade, struggles over affiliation with the more conservative United Hatters of North America had grown. The December 1916 issue of the The Hat, Cap and Millinery Workers Journal included articles such as “Does it Pay to be a Union Member,” and two by the prominent hatter’s union activist Max Zaritsky about the internal workings of the union and its participation in the “Joint Council,” even though the United Hatters were a conservative group who refused to be classed as a needle trade (unlike their comrades in the cloth hat trade). The United Cloth Hat and Cap Makers of North America was a radical bund, its monthly journal packed with articles spewing Socialist flames, railing against the bosses and capitalist greed. The two groups included as their members almost 100% of the hatters, who comprised 32,000 members by 1921, mostly in New York, Pennsylvania and Connecticut.

Some men are born to lead, and others not; Some choose a small pond in which to be big fish. In America, everyone could count. In the sweatshop, Szaja was likely a nobody, poorly paid and exploited to the bone. Out the door, though, he could be someone. The Union Hatters Sick and Benevolent Society was his standing stone. “Founder and Leader” reads the bronze tablet. “Recording Secretary:” his name is proclaimed, incised on the grey granite gates of its burial field. These gates and graves and the discarded tablet are the only palpable remainders of the UHSBS, its records lost to the wind after its liquidation in 1990. Neither the YIVO archives at the Center for Jewish History, nor the UHSBS custodian, Mount Hebron Cemetery in Flushing, nor the New York State Insurance Department Liquidation Bureau know the whereabouts of the files that would shed light on Szaja’s deeds, those that caused the tablet’s fashioners to sing his praises for his efforts during the group’s “darkest hours.” The stench of red-baiting filled my nostrils as I read the raised letters on my newest find. I imagined more was at hand than a testimonial to a burial society well-run. The spaghetti twists of interchanges near the north side of Flushing Meadow Park bollix the mind, winding in and out of the park’s borders and carefully avoiding the consecrated ground of Mt. Hebron cemetery, named after the hill from which the patriarch Moses was condemned to watch as his people entered the land of milk and honey without him. What a strange name for the site of over 1,000,000 Jewish burials! There I’d found Szaja listed in the cemetery’s website.

Thousands of gravestones stood like pine trees in a forest as I drove the paths, searching for his grave. Was Szaja really there? Did it matter to anyone? Perhaps I and my acquaintance Andy are in a club of our own. We want to know everything about this man, and resurrect him memory best as we can. Though Szaja’s wife of many years is buried next to him, I know through census records that they lived apart in the Bronx in 1930, and that at her death in June 1946 in Monticello, NY, the informant was a man named Charles Roth of Mosholu Parkway, not Szaja, her husband, who perhaps was spending June back in New York. Szaja and Helen Rotblatt indeed lie side by side in the UHSBS plot near Mt. Hebron’s eastern gates.

Though well-tended, the plot is the worse for wear; no burials have been done there since 2008 and little, if any, room remains. The list of officers inscribed on the gates is a long one. America meant equality and opportunity for all. You didn’t need yikhes or a fancy degree to serve as an officer of burial society. Nonetheless, doing so furnished a modicum of self-respect. Szaja was revered, though his wife may not have loved him. His memory isn’t dumped yet. I intend it never be.