Chasing a Name Lost to Time: The New York Times 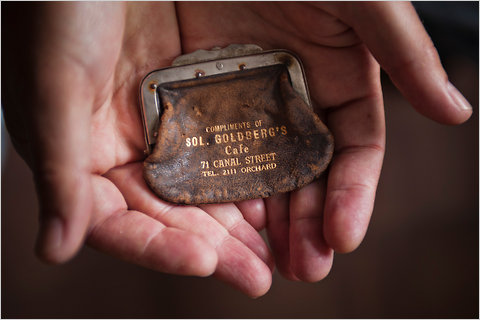 Andrea Morales/The New York Times Benjamin Feldman with the purse from Sol Goldberg’s Cafe that he found at a flea market, which led him to find a tale of a Jewish bar owner and bootlegger on the Lower East Side.

Benjamin P. Feldman, a retired real estate investor with the time and the money to chase his enthusiasms, was rummaging through a bin at a flea market in Chelsea last winter when he came across a weathered leather change purse with words engraved in gilt: “Compliments of Sol Goldberg’s Cafe, 71 Canal Street, Tel. 2111 Orchard.”

There was something about the antique purse and its desperate gambit to lure customers that spoke to him.

“I needed to know this guy,” Mr. Feldman said. “I sensed a very sad story and wanted to know what happened to this poor guy.”

Many people would pay the $15 and perhaps store the purse in a curio cabinet. Not Mr. Feldman, a deceptively unassuming man of 59 who became an amateur historian of New York after retiring as a founding partner of SL Green Realty in 2000. He spent some 300 hours over six months tracking down Sol Goldberg, his bars, his string of tenement homes, his immigrant ancestors and his descendants. He searched through old directories and telephone books, marriage, land and surrogate’s archives, census and criminal records, and Internet ancestry files, and he photographed buildings that were landmarks in Mr. Goldberg’s life. 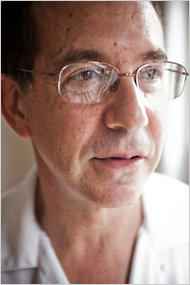 His sleuthing about someone who was neither a friend nor a relative had absolutely no practical purpose. Solving the tantalizing mystery simply became a compulsion for Mr. Feldman, who once researched another obscure person based on a 19th-century expense ledger.

“It’s valuable to raise a person’s story from the dead, that people shouldn’t be forgotten,” he said. “In every grave lies a wonderful story.”

Asked why certain names lost to history obsess him, he compared it with falling in love, where “there’s no rhyme or reason to it, but you know it when it happens.”

The one serendipitous upshot of his dogged search was that the man whose name was on the purse turned out to be the grandfather of the late playwright Herb Gardner, whose works, including “A Thousand Clowns,” often revolved around the kind of eccentric New Yorkers that Mr. Feldman would appreciate. He pointed out that the 1992 Gardner play “Conversations With My Father” was about a bar owner on Canal Street who changed his name from Goldberg and whose father’s name was Solomon.

Mr. Feldman, an Upper East Sider whose other enthusiasm is sustaining Yiddish, said the search cost him little besides subway fares.

The first gumshoe step he took after discovering the purse was to head downtown to 71 Canal Street, near Allen Street. The building was still there, though a Chinese restaurant operated where the cafe had probably been.

The unusual telephone number dated from before the two letters of the telephone exchange began to precede the number, and Mr. Feldman deduced that the cafe had opened before the 1920s.

After checking Trow’s directories at the New-York Historical Society, he found a listing not only for the cafe but also for the Eagle Non-Intoxicating Wine Company, which was run, he learned, by a Sol Goldberg and his son Herbert. On a Blogspot page, Mr. Feldman tells how, using ancestry Web sites and census records, he learned that Sol Goldberg had emigrated as a teenager from Russia in 1892, living first in Virginia before settling with his parents at 149 Ludlow Street on the Lower East Side. He married a woman named Rosa Friedlander.

By 1902, he was operating a saloon at 17 Ludlow Street, and living above the store in four rooms in a building that today is populated by Chinese immigrants. The rent for the saloon and the rooms was $75. In owning a tavern, Mr. Feldman said, Sol followed “a well-trod path” because Jews, barred from many occupations in Eastern Europe, were allowed to undertake work that might be seen as sinful for Christians.

By 1908, Sol was selling liquor at 71 Canal Street, the address on the purse, and moved to a series of progressively nicer tenements along East Broadway. He and Rosa had three children, Herbert, George Milton and Helen. Soon the family members left the teeming Lower East Side for the wide-open spaces of Brooklyn, first in Brownsville, then Flatbush, where they bought an attached house on Martense Court.

Sol’s luck ran out with the dawn of Prohibition, eventually forcing him to close the cafe. On Oct. 17, 1920, he was arrested for selling a drink to one Isidor Einstein. Federal archives of the Volstead Act’s enforcement show he paid a $250 fine.

The decade afterward is veiled in mist, but Mr. Feldman confirmed with descendants that — no surprise — Sol got involved in bootlegging. He learned that from R. Allen Gardner of Reno, Nev., a grandson, who, even with the name change, he tracked down in April with a day’s assistance from a genealogist. Mr. Gardner, 81, is a retired professor of comparative psychology who gained fame for teaching American Sign Language to a chimpanzee.

He told Mr. Feldman by telephone that as a baby, his parents, George Milton and May Goldberg, would take him cruising by car around Brooklyn. The trunk was filled with cases of liquor, but the police would never suspect a young couple with a baby. It was Sol who dealt with the wholesalers.

During the call with Mr. Feldman, Mr. Gardner asked: “Perhaps you heard of my late brother, Herb? He was a playwright, kind of well known.” Mr. Feldman said his spine tingled because he had seen “Conversations With My Father,” with Judd Hirsch as Eddie, the keeper of the seedy bar on Canal Street.

In fact, he soon learned, Sol and the father of the Gardner brothers owned the Silver Gate Bar and Grill — at 258 Canal — after Prohibition was repealed. It endured until 1945, two years after Sol died of cardiac failure. Sol’s will suggested he died relatively poor, leaving his family less than $5,000.

As a coda to his quest, Mr. Feldman visited the Beth David Cemetery in Elmont, N.Y., in May to photograph the spare grave site of the man whose name was on that weathered purse.

“I felt I had come to the end of the line in this whole business of raising the dead,” Mr. Feldman said. “I felt like I finished my job.”